This image from the excellent QD in Practice event organised at Leeds University really drove home to me just how powerful and useful KWIC (Key Words In Context) concordance displays can be.

I can see, without being able to understand, that there is a difference between lines 1, 2 3, lines 4 though 11 are the same, line 12 is different and lines 13 through 20 are the same in terms of the words in red that appear before (it’s R>L text, remember!) the highlighted keyword.

Since I first encountered KWIC in a module on corpus approaches to language teaching I have recognised that it has an incredible simplicity and power compared to many other ways of showing highlighted text.

From text to context – displaying search results in NVivo at Present

Compare it to this:

Which is the results output from a text search in NVivo.

This is not a bad output, I see context in a similar was a KWIC concordance and can access the underlying data immediately. However, the appearance precludes some rather more important options KWIC enables.

Another way to reach this sort of word search is by running a word frequency query in NVivo – which will then create a list of words along with information on their length, their count, a weighted percentage (need to learn more on that) and a list of “similar words”.

The similar words are derived by including stemmed words – a process which has some issues associated with it which I’ll go into a little later. Here I’m going to focus on the representation of that information:

So double-clicking on a word takes me to the same display as previously for a stemmed text search: 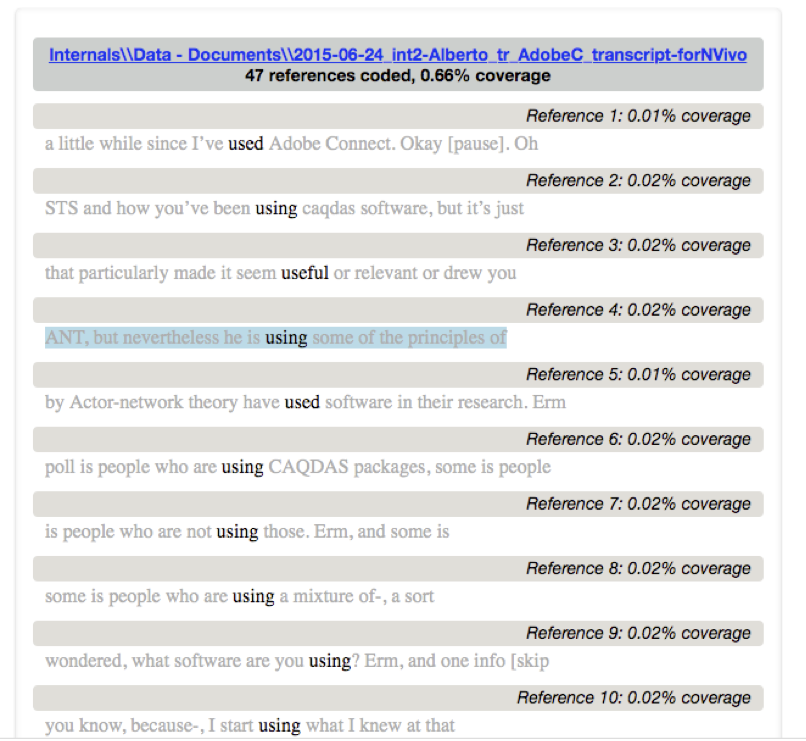 Again not bad – I get some context and information on the source. And from it I can go and find the word in context in the original text by clicking the link – and the word is helpfully highlighted:

EDIT/UPDATE – from chatting with Silvana (and revisiting Kathleen’s comments in the NVivo Users Group). Word tree is indeed *very* similar to KWIC:

they show the key word in the middle and the branching before and after. The differences however are still important – while you can select the text to see connections: 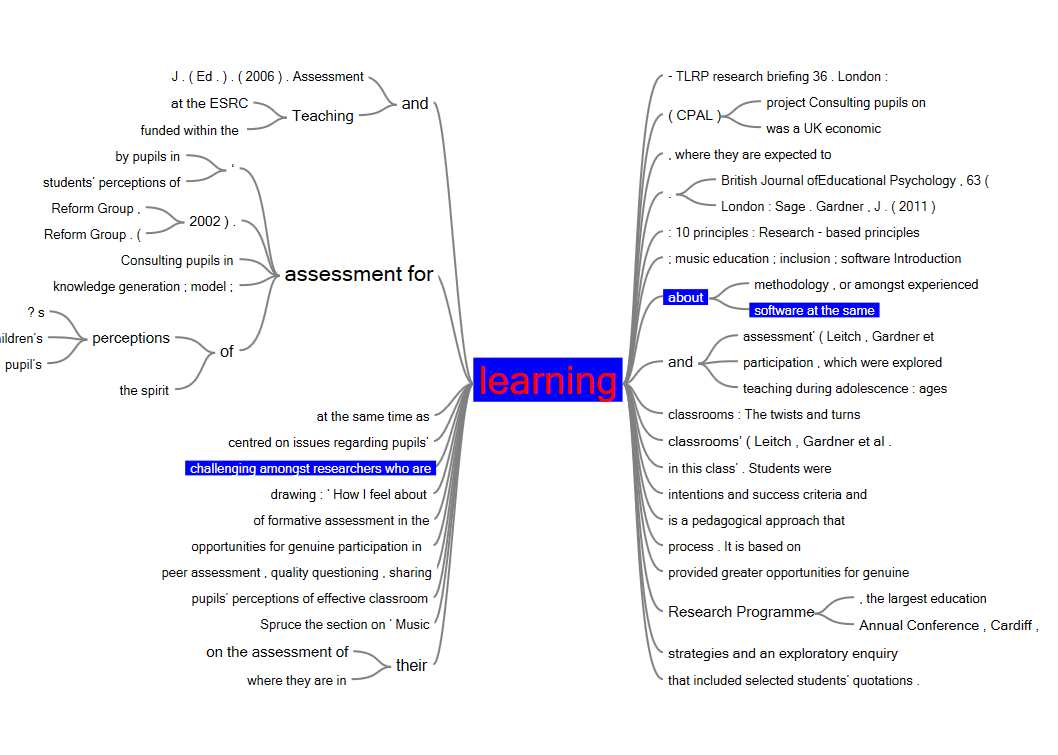 What you cannot see as easily are the sentences across, or any variation. It’s a powerful tool that does much of the work of KWIC – but I’m not sure if the simplification comes at a cost. This is one for me to look at further – thanks to Kathleen for flagging it to me to cogitate on and explore further!

Of course MaxQDA does have KWIC

However, there are a bunch of things I can’t do or easily see which KWIC would enable:

And here’s where the power yet simplicity of KWIC really holds potential for working with this sort of query and any coding from that. Consider what you can see when the data is presented in a KWIC concordance:

The power and importance of sorting

What I would like to be able to see is the kind of output shown above as an option along with the normal contextual view. I would want to be able to sort it by the middle column and/or the words immediately preceding or following that. This then really helps spot patterns:

This would help with viewing the associations created from a query.

However, to really have power you would need to be able to use it to interact with and change those associations.  the functions I would really like (via right click or similar) are:

1 – remove link of stem (e.g. De-link office and officer as being the same word)

3 – (Ideally – probably harder!)  create a link for lemmatisation and ideally save it to a dictionary or thesaurus. AND / OR differentiate on set of used to from another set of used to.

All of these are hugely facilitated by a KWIC concordance view – and hopefully some of this is fairly simple whilst other aspects may need to be on a longer list but I believe are really worthy of consideration especially for approaches oriented more towards content analysis and data mining rather than inductive analysis.

View all posts by stevecaqdas

2 thoughts on “KWIC interfaces and concordances”